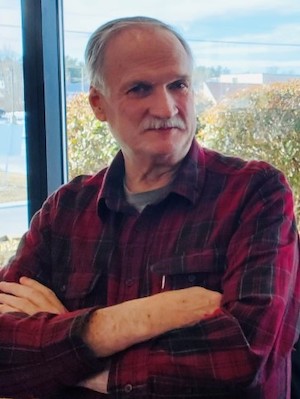 HENNIKER, NH:  David Allen Richards, 68, died peacefully on September 5, 2021 at CMC Hospital in Manchester, NH after a 35 year struggle with heart disease. Our thanks to CMC and Tufts Medical Centers for keeping him with us the past 7 months.

Dave was born February 22, 1953 in Glens Falls, NY to Jean and Ivan Richards. He was predeceased by his parents and grandparents  Harry and Mae (Tyler) Thompson of Saratoga Springs, NY and Irene Richards of Schuyĺerville, NY.

Dave grew up in Schuyerville NY, was active in school sports and hunting.

He graduated  with high honors from Boces Technical School with a Certificate in Electrical Trades. He later began his journey into HVAC and worked in that field for over 40 years, until retiring from IBM in Essex Junction, VT.

He and his wife, Suzanne (Kindred) Richards from Saratoga Springs, NY, made their home first in Saratoga, then in  Vermont where they owned and ran LAMBS Maternity Home, a foster group home for unwed mothers. They finally made their home in Village Green, Henniker NH.

Dave was a man of faith and loved his family. He enjoyed church, hunting, fishing, snowmobiling and boating.

He will be greatly missed , especially by his family and friends. He was married for 49.5 years to Suzanne M. (Kindred) Richards of Henniker, NH and was a great dad to identical twin sons, Stephen M. Richards and his wife Megan from Rochester, NH, and Jason A. Richards and his wife Eryn of Hudson, NH and a daughter, Julie M. Richards of Amherst, NH. He lovingly leaves behind two sisters, Lynda M. Defoe of Schuylerville, NY and Dorothy A. McGeever of Schuylerville, NY, a brother Ivan H. Richards of Saratoga Springs, NY, seven grandchildren and two nieces and two nephews.