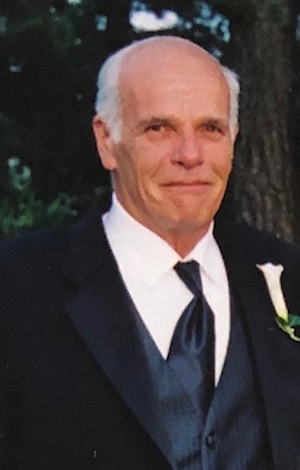 Born on September 16, 1935, he was the only son of Nelson and Arlene Cook. He spent his early years growing up in Antrim, NH.  When he was in high school, his family moved to Holly Hill, Florida.  After high school, he enlisted in the United States Air Force. After being honorably discharged, he attended Tri-State College and earned a degree in Mechanical Engineering. He married Shpresa “Bess” Christo in 1968 and settled in Windham, NH a few years later in a home that he hand-built himself at night after work.

He was an extremely hard worker all of his life, and would never hire anyone to do anything that he felt he could do himself, which for him was almost anything. After a nearly 40-year career at Stone + Webster Engineering in Boston, he spent his retirement traveling and helping in his son’s business.

He was predeceased by his sisters, Beatrice, Dorothy and Priscilla, and his wife of 44 years, Bess. He leaves behind his son, Miles, his daughter-in-law, Amanda, his three beloved grandchildren, Alex, Lizzie, and Nate, his sister Marilyn, and many nieces and nephews.

“Bubba” was a helpful friend, a supportive father, and a loving grandfather. He was deeply loved and will be terribly missed.

Graveside services will be held at the North Branch Cemetery, Cemetery Rd Antrim NH on October 19th 2020 at 11:00 am.  Masks and social distancing are required.  The Holt-Woodbury Funeral Home & Cremation Service Hillsboro, NH is assisting the family.

In lieu of flowers the family requests that donations be made to the Dementia Society of America: https://www.dementiasociety.org/