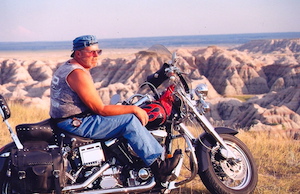 Doug grew up in Sherborn, Massachusetts. After serving in the U.S. Navy during the Vietnam War years, he became Sergeant of the Sherborn Police Department and co-founded the Sherborn Rescue Squad.  Doug moved to Henniker in 1980, and worked full time as a firefighter and EMT for Hopkinton. He joined the Henniker Police Department in 1980, serving as sergeant from 1989 until his retirement in 2004.

He was an avid traveler, Harley Davidson enthusiast, and lifelong outdoorsman. He also loved his two dogs, Rufus and Rowdie.

Doug was much loved in Henniker and for his last birthday, family and friends organized a parade for him that grew to be three miles long.

Graveside services will be held Saturday October 17, 2020 at 10 am in Henniker New Cemetery in Henniker, NH.  Masks and social distancing are required.