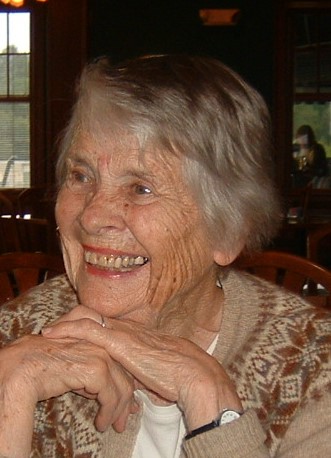 CONCORD, NH:  Era (Kimberley) Holmes 93 died October 26, 2016, peacefully in her home at Havenwood-Heritage Heights, where she lived for the past five years.

Born in 1923 in Harbin, China, the daughter of a British customs officer and a Russian refugee, Era grew up in China and spent World War II as a prisoner in the Yanchow Internment Camp because she was a British citizen.

Following the war, Era moved to Hong Kong where she met Al Holmes.  Al and Era were married in 1950, and one year later moved to Wisconsin.  Era became a citizen five years later. While raising her family in Wisconsin and then in Altamont, NY, Era was a homemaker and served as a volunteer for various organizations including as a guide at the Five Rivers Environmental Education Center.  Later she worked at the Construction Employers Labor Relations Association and in the Development Office of the Albany Boys Academy.

After retirement, Era and Al moved to New Hampshire in 1994, settling in Hopkinton where they were members of the Hopkinton Congregational Church and other civic and community organizations. Era was active in local politics, ran for the NH Legislature in 2000, and enjoyed playing tennis with her friends at the Racquet Club of Concord.

Era was predeceased by her husband, Albert Holmes. She is survived by her daughter, Sarah Holmes of Boston, MA, son and daughter-in-law, Nicholas and Brigette Holmes of Dunbarton, and two grandchildren, Henry and Hillary Holmes.

In lieu of flowers, donations may be made to the SPCA of Merrimack County, Habitat for Humanity, or a charity of the donor’s choice.