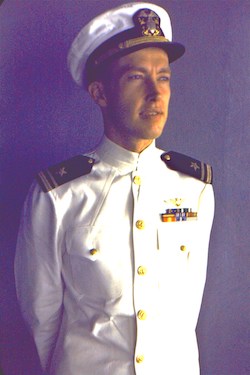 HENNIKER, NH:  Theodore (Ted) Yngve Korsgren, Jr. passed away on March 23, 2020 at Harris Hill Center in Concord, NH.  Born August 28, 1927, the eldest son of Theodore Yngve Korsgren, Sr. and Carol (Wilson) Korsgren, he grew up in the Greater Chicago area and loved to reminisce about the places and people of his childhood.

At 18, in the closing days of World War II, he enlisted in the US Naval Reserve and served as a Seaman First Class at the Naval Ammunition Depot, Hawthorne, NV, and at the Naval Aviation Support Activity, Oakland, CA.

With the outbreak of the Korean Conflict, he returned to the Navy in 1951 as an Aviation Cadet, earning his Naval Aviator’s Wings and a commission as Ensign, United States Naval Reserve.  He was assigned to VF- 54, an attack squadron assigned to the aircraft carriers USS Valley Forge and USS Philippine Sea.  Flying missions over Korea and later Southeast Asia, he earned many service medals and promotion to Lieutenant JG

Leaving the service in 1955, he resumed his career as a mechanical engineer, and later was chief engineer for a number of manufacturing companies in Illinois, Ohio, New Jersey, and Connecticut before launching his own company in Litchfield, CT.

He retired in 1993 and located to Palmetto, FL for several years before returning to Southbury, CT.  In 2013 he moved to Rush Square in Henniker, NH.

Ted was an energetic, socially engaging fellow who approached life as a glass half full.  He made friends easily and kept many of them to their end or his. Ted was a life member of Acacia fraternity, Association of Naval Aviators, and Tailhook Association.

He was predeceased by his parents, his wife, Therese (Olsen) Korsgren, and by his first wife, Meta Korsgren.  He is survived by his brother, Bill Korsgren and wife Mercy of Pagosa Springs, CO and sister Jacqueline (Jackie) Reynolds of Rocky Mount, NC.

He is also survived by children:  Theodore Yngve Korsgren III (Vanessa) of Fairbanks, AK, Siri A. Korsgren of Norwalk, CT, Elin Korsgren Leonard (Peter) of Henniker, NH, Disa K. Austin (Bill) of Thomaston, CT; and Anna Korsgren of Torrington, CT.  He is also survived by grandchildren, James Theodore Leonard of Henniker, NH, Kathleen Leonard Radlof (Frank) of Francestown, NH, Sam Jones of Norwalk, CT, and a great-grandson, Frank P. Radlof of Francestown, NH plus many nieces, nephews, and his friends at Harris Hill Center in Concord, Rush Square in Henniker, and golf courses all over the US.

The family would like to thank the staff and professionals at Harris Hill Center and Dr. Steven Lawrence and staff at Family Tree Healthcare for the excellent care and consideration that they provided Ted in his later years.

Services and Burial will be held at a later date at the convenience of the family.