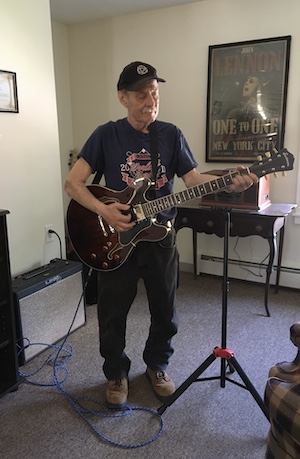 HENNIKER, NH:  It is with heavy hearts that the Walton and Learn families announce the passing of their loving father, John Michael Walton on June 13, 2022.

John was born in Nashua, NH on April 8, 1951 to the late Paul R. and Valerie (Berube) Walton.   His siblings included Paula and David Walton.

John was passionate about fishing, playing guitar, and listening to the Beatles. He was known for being a peaceful man, with quick wit, and the ability to sing and play his acoustic, electric and bass guitars. Many who knew John enjoyed his story telling and ad hoc song lyrics.

To provide a safer environment for his children, John moved his family to Hillsboro in the early 80s.  He spent much of his life working in masonry and landscaping and operating his own business.

Living in Henniker the last few years, John grew fond of his neighbors Steve, Linda, Gary, Sue and Ed.  It should be noted that Robin and Jackie held a special place in his heart.

Members of his family include his son, John Walton Jr. and his wife Diana, their sons Ben and Zach, and his daughter, Christy Learn, her husband Dana Learn, and their sons,  Daniel and Aidan.  He is also survived by his former spouse, Diana Walton.

Services will be held at the convenience of the family.

In lieu of donations or flowers, John would ask that you enjoy quality time with family and friends.