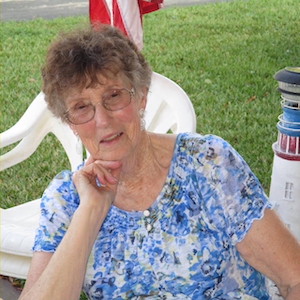 Marjorie was born February 27, 1929 in Tinmouth, VT, to the late Joseph and Ruth M. (Richardson) Murray.

Marjorie grew up in Canaan, NH and graduated as Valedictorian from Canaan High School in 1945.  She and her husband, Clyde, moved to Weare, NH in 1959 where they lived full time until the winter of 1986 when they become snowbirds and began wintering in Port Orange, FL.  They spent time at Rose Bay Travel Park and later moved to Pickwick Village, where they had a large group of friends who Marjorie loved so much.

Marjorie worked for First National Store as a cashier and also at Pierce Nursing Home as an aide.  She also worked for Sylvania in Hillsboro, NH and as a Medicare Billing Specialist for Blue Cross Blue Shield in, Concord NH.  She retired from the Town of Weare, after 13 years as an Assessing Clerk for the Selectman’s Office.

Calling hours will be held Thursday, August 4, 2022 from 4 to 7 pm at the Holt-Woodbury Funeral Home, 32 School St, Hillsboro NH.

Burial will be at a later date in Johnson Cemetery, in Weare, NH.

In lieu of flowers, please make a donation to the Granite VNA Hospice, which provided tremendous support and care to Mom at the end of her life.