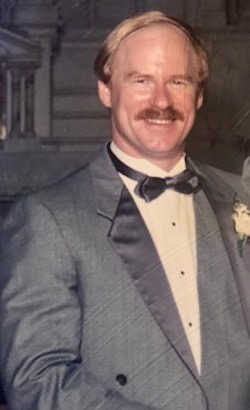 HENNIKER, NH:  The family of Robert (Bob) P. Jones, sadly announces that he peacefully passed away on July 12, 2021 after a courageous 2-year battle with pancreatic cancer at his home in Coventry, RI. Bob was 73 years old. He was a long-time resident of Henniker, NH before moving to Coventry in 2020.

Born in Natick, MA on August 10, 1947, he was the son of Joseph T. and Virginia M. (Williams) Jones of Chester, NH. Bob served in the U.S. Army from 1968-1971 and was stationed in Germany for the duration of his service.  After he graduated from Keene State College with a B.A., Bob worked for the State of NH for 34 years and was the Unemployment  Compensation Bureau Director at Employment Security before retiring in 2009.

An avid outdoorsman, Bob was a Boy Scout and Explorer Leader for many years in Chester, NH. He loved vacationing at his summer cottage in New Brunswick, Canada.  He was also a motorcycle enthusiast and jogger. Bob was a big fan of National Geographic, Jacques Cousteau, and nature documentaries, loved a big bowl of ice cream (with milk), and he played a great guitar.

Bob is survived by his devoted wife of 34 years, Christianne (Breault) and his loving children, Jessica of Coventry, RI and Joseph of Rochester, NH.  Bob also leaves behind his brother and two sisters and their spouses, Francis and Linda (Sell) Jones of Bumpass, VA, Kathleen (Jones) and Randy Felix of Brooklyn, NY, and Joanne (Jones) and David Boyce of Sanbornton, NH, an aunt and uncle, Cynthia (Williams) and Jack O’Shea of Enfield, CT, a sister-in-law, Dorina (Breault) and Richard Holden of Penacook, NH, and many loving cousins, nieces, nephews, Canadian relatives and long-time friends. Bob is predeceased by his parents Joseph and Virginia Jones and brother, Kevin Jones.

The family would like to thank the Rhode Island Hospital and Hope Hospice staff for their outstanding care.

Calling hours will be held Wednesday July 21 2021 from 10 am to 12 pm and will be followed by a Graveside Services at 12:30 in Henniker New Cemetery on old Concord Rd, Henniker, NH.