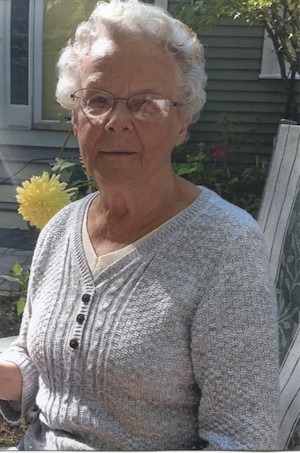 She was born and raised in Canaan, NH.  She left Canaan as a teenager to become a nanny in Franklin, NH.

She then started working as a waitress for Andrew Normandin, where she met our father Armand Omer Normandin when he came home from service in the Navy.  They married in 1950 and while still living in Franklin had their first daughter, Anna Mulliner of Washington, NH.  They then moved to Hillsborough, NH in 1950 and had Diane Platt, who later married Stephen Platt of Antrim.  Their third daughter, Lou Ann Rousseau married Bob Rousseau, both of Hillsborough.  They had seven grandchildren, Shane, Melinda and Brian Mulliner all from Washington, Rebecca McClure from Bennington, Caleb Platt from Antrim and Christopher and Cody Rousseau both from Hillsborough.  They also had six  great-grandchildren.

Arlene worked at GTE Sylvania in Hillsborough for about 35 years when she retired.  She loved playing cards and cooking for large family gatherings, along with cold brisk walks along Beard Brook Road and the ocean.

She was predeceased by her husband, Armand, who died in 2001., her father, Harry Powell and mother, Martha Powell, both from Canaan, NH, her brother, Walter, from MA and sisters Rose, Louise, Laura and Ruby.  She has a surviving sister Barbara still living in Canaan.

She will be sorely missed by her family and so many local people who remember her for her kindness and smile when talking to her.

In lieu of flowers, please make a donation of your choice to an Animal Rescue League in NH or to Alzheimer/Dementia Organization.