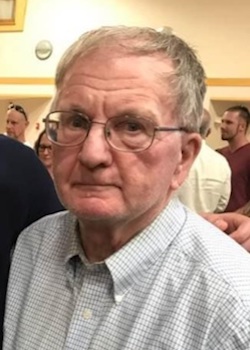 HILLSBORO, NH:  John Warren Olson, 82, of Hillsboro, passed away peacefully, at his home, surrounded by family on December 8, 2020 from complications of Parkinson’s Disease.  John was born in Concord, New Hampshire and was the oldest of seven children born to Dr. Thor and Hedwig Olson.

John spent his entire childhood in Hillsboro and talked frequently of many fond memories playing at the beach at Beards Brook and playing baseball at Grimes Field.  After graduating from Hillsboro-Deering High School in 1955, he later enrolled at the University of New Hampshire in 1957 and graduated with a degree in Geology.  After college, John served two years in the United States Army spending some of that time overseas in Korea.  After leaving the Army, he returned home to Hillsboro where he worked in construction and later managed the local Aubuchon Hardware store for 20 years.  While working at Aubuchon, John started a program called Rent-A-Teen that he took great pride in.  The program connected local teenagers with people in the community who needed assistance with household work.  While living in Hillsboro, John met and later married Elisabeth (Betsy) Margulies on September 8, 1973.  John and Betsy raised two children, Michael and Catherine.

Besides the love for his family, John was also passionate about all things sports.  John volunteer coached community basketball teams and later coached at various levels within the Hillsboro-Deering School District.   John made it a point to attend as many of the high school basketball games as he could, even after he stopped coaching. John also loved golf and was a member of the Angus Lea Golf Course for many years.  John talked of his many friendships made playing at the golf course and was always willing to talk about being the club champion in 1969. John was also a diehard Boston sports fan.  John seldom missed a Red Sox or Celtics game and was more than a little relieved to finally see the Red Sox win the World Series in 2004.   In addition to his love of sports, John also enjoyed playing cribbage and going to the movies.  John also enjoyed his daily morning gatherings with his friends at McDonalds where they would talk sports and politics and read the daily newspapers.

John was predeceased by his parents, Thor and Hedwig Olson, brother, Walter Olson, and his sisters, Susan Olson and Jane Olson, as well as his wife Elisabeth Olson.  John is survived by his son, Michael Olson and his wife, Kristin of Boise, Idaho and his daughter, Catherine McGillicuddy and her husband, Christopher of Hillsborough, four grandsons, William Mulliner, Hunter Mulliner, Connor Olson, Brendan Olson, three step-grandchildren, Nathan McGillicuddy, Alaina McGillicuddy and Erin McGillicuddy.  John is also survived by his brother,Paul Olson of Maine, and sisters, Bea Donald of Vermont and Nancy Olson of Idaho.

No service is planned at this time.

Memorial donations can be made in John’s name to the Hillsboro Youth Athletic Association (HYAA), PO Box 1424, Hillsboro, NH 03244.