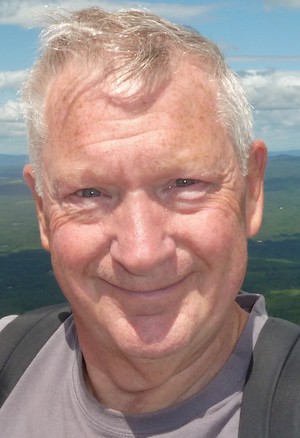 Jack is survived by his wife of 43 years, Linda M. Davis; his son, Aaron, and wife, Amber, of Enfield, CT; his daughter, Abby, and husband, Aaron, of Suffield, CT and their two children, Layla and Trey; his brother in-law, Richard Denoncourt of Granby, MA; and his mother and father in-laws, Jean and Jeanne Denoncourt of Chicopee, MA.

Jack was an active member of various volunteer organizations throughout his lifetime; Junior Achievement, The United Way, 20 years at Community Health Resources in Enfield, Town of Enfield Winter Carnival and 4thof July Committees, and President of the Friends of Weare Public Library. Further, Jack retired from Hallmark Cards Distribution Center after 38 years of service.

Jack was a devoted family man, hiker and world traveler. He enjoyed nature, reading and being Papa to his two grandkids.

A Celebration of Jack’s Life will be held in Connecticut at a later date.

In lieu of flowers, Jack may be remembered with contributions to Caretakers of Soapstone Mountain at www.caretakersofsoapstonemountain.org, to the National Park Service at www.nps.gov, to the Friends of the Weare Public Library at P.O. Box 227, Weare, NH 03281 or Hospice/VNA of Concord at www.crvna.org.