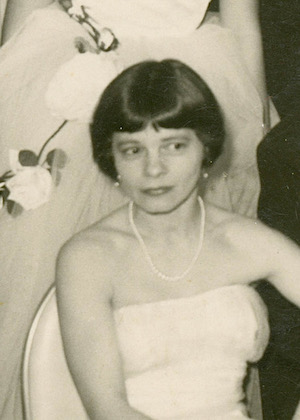 She was born in Hungary March 23,1927, daughter of the late Dezso and Erzsebet (Bertalan) Horvath.

Katalin, known as Kati, was a petite woman with a larger than life personality. She was a powerhouse and a force to be reckoned with in all aspects of her incredible and tumultuous journey through life.

She shared her childhood with two sisters and three brothers growing up in the bucolic setting of her father’s mill in the countryside outside of Budapest, Hungary. Graduating from a girls private boarding school in Sopron, working for the Red Cross and marrying Laszlo Potyondy, during Hungary's unstable political climate, she weathered through the tyranny and suppression of occupied Hungary. Kati was a woman of single mindedness, courage and a vision that compelled her to escape her home country and bring herself and her two children to the United States in search of peace, opportunities and freedom.

Her story begins as a young woman who looked to the sky and was mesmerized by a silver sun streaked plane gliding over the horizon. She pointed to the airplane above the clouds and told her friend, "One day that will be me on the plane,” and so began the next chapter of her life. Without goodbyes for fear of changing her mind and hurting those she loved, she packed a few belongings and left her family and friends behind and a country she would never again call her home.

Now a political refugee, Kati crossed the Hungarian border into Austria during the wee hours of the night. Intending to find asylum in South America with cousins, her fate took a different turn. Participating countries that welcomed the displaced during the 1956 Hungarian uprising were closing their borders and the last plane to take flight from Austria was bound for NYC in the United States and Kati's dream became a reality.

Life was not easy in her new country, but with determination and new found friends she recreated herself and provided sanctuary for herself and children. She studied hard and became an American citizen, of which she was proud, and later became a dental technician specializing in the field of orthodontics.

Her creative personality and boundless spirit took her into the private sector where she created and invested in small businesses, during a time when it was still a man's world and women stayed home. Kati's sacrifices were enormous and her leap of faith venturing into the unknown was not for the faint of heart. She was no mere mortal in her accomplishments. Where some would have caved under the pressure of starting over with dependents, her love and dedication gave her the strength and ability to create a secure home in her adopted country. Kati was a tower of strength, a pioneer and a loving mother respected by all who were graced by her friendship.

A celebration of her life will take place this summer. The Holt-Woodbury Funeral Home & Cremation Service Henniker, NH is assisting the family.