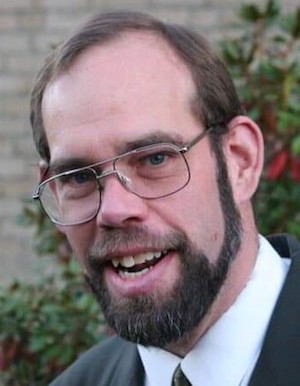 HENNIKER, NH:  Michael E. Sullivan, 52 years old, passed away unexpectedly on December 10, 2019. Mike was an author, a librarian, an entertainer, an active member of the Lions Club and all-around good guy.

Michael was predeceased by his mother, Helen Sullivan (Boudrow), and is survived by his father, Edward Sullivan, four sisters, Virginia Chapman, Rita Law, Jeanne Sullivan and Dorothy Spoerl, three brothers, Sean Sullivan, Laurence Sullivan and Donald Sullivan, as well as too many nieces and nephews to mention.

Although he had no children of his own, he had a special way with kids, whether it was juggling, playing chess, making origami or playing his guitar and singing. More important than doing all this with the kids, was his passion to teach them how to do it themselves.

It was always a given that at any family get together Mike was sure to be at a table, surrounded by the kids, playing chess with one while teaching three others, and making origami with the rest. He never showed up without his chess board and his little plastic container of paper squares.

Michael was loved and admired by the communities in which he served as librarian, most recently the Town of Weare, NH.

Mike was one of the smartest people I know and although he was a very private person, Mike always wanted to share his knowledge and talents. Mike was such a talented writer that he could take “war stories” that he heard around the family table (an unfortunate side effect of a family of cops and EMTs) and turn them into children’s books (in which the characters were named after his nieces and nephews.)

He will be missed by everyone who had the pleasure of crossing paths with him.

Michael’s family is working to establish a memorial fund to honor Michael and continue his work with engaging children in reading and exploring life. In lieu of flowers, please send donations in Michael’s memory to one of the many wonderful organizations that he was involved with. His passion for children and civic involvement should all be remembered. Nichols Memorial Library, 35 Plymouth St, Center Harbor, NH 03226-1339 or Weare Public Library, 10 Paige Memorial Lane, Weare, NH 03281 or Weare NH Lions Club, PO Box 153, Weare, NH 03281.