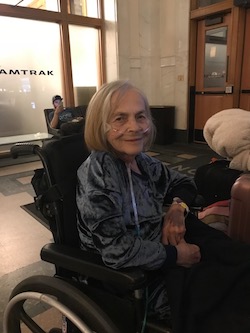 Sheila was born to Clarence and Grace (Baney) Seng in Dubuque, Iowa on August 14, 1944. She spent most of her life in Wisconsin before moving to Colorado.  She married Francis Joseph (Frank) Paquette, a city planner, on November 29, 1963 in Wisconsin. Sheila worked as a visiting home health aide, caring primarily for elderly individuals, for many years before her ultimate retirement.

Sheila was very pragmatic, strong, and independent, but would also give someone the shirt off of her back if he/she needed it. She had a particular fondness for babies and the elderly and had a special gift for caring for these populations.  She enjoyed camping with her close friends Don and Henrietta Fox, fishing, and especially making her occasional trips to casinos to try her luck at the slot machines.  Sheila also loved discussing politics with family members, friends, and pretty much anyone else who was interested.  She had a great, quick sense of humor and loved to laugh. She will be deeply missed by her family and friends.

Sheila was preceded in death by her son Francis Benedict (Ben) Paquette and her husband Frank. She is survived by her three daughters, Nicole Paquette of Greeley CO, Andrea Paquette Hammond and her husband Matt of Henniker, NH, and Clarice Paquette Wills of Seffner, FL, as well as 10 grandchildren, 3 great-grandchildren, and her very dear friends, Don and Henrietta Fox, who she considered family.

Services and interment will be held at the convenience of the family at a later date.

The Hold-Woodbury Funeral Home and Cremation Service of Henniker, NH is assisting the family.