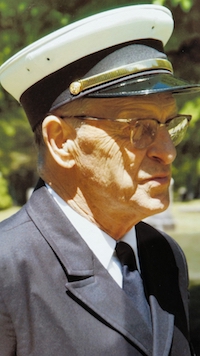 Loved ones that will miss Dick until they meet again are his wife Lois Leavitt; his daughter Sylvia Nye and fiancé Chuck Anderson; his son and daughter in- law Brian and Deb Leavitt with their children Scott and Lindsey Leavitt, Stephen and Desiree Leavitt, Julie and Jamie Bateson, Andrew Bauer and Sonya Smith; and thirteen great grandchildren.

He was born November 29, 1930 in Sunapee, NH, son of Ernest and Hazel Leavitt. While growing up on the family farm in Newport he learned to love and respect animals and sports. This led to him attending UNH where he met his wife of 67 years in 1951. After college he managed several dairy herds in NH which led him to the Tavern Farm (now known as Crotched Mountain Golf Resort) in Francestown.

In 1962 he left dairy farming to build his home to where they reside today and started an electrical business. He continued his love of farming and being outside for his many hobbies. If he wasn’t busy tending turkeys for the Thanksgiving table, hens for their fresh eggs, cows and pigs, he was gathering sap in the springtime, producing maple syrup in his sap house, or tending his beehives for honey. He also may have been found working his green thumb in his large vegetable, and beautiful flower gardens, and keeping his bird feeders full attracted plentiful wildlife for viewing pleasure or with his son or grandsons fishing or hunting.

If this wasn’t enough, his love of community kept him active in many diverse endeavors. He coached and umpired youth sports (as his kids and grandchildren grew) as well as partaking in some mean tennis on the tennis court. He served on the Francestown School Board and Police Department, and was active in the Community Church, and for 12 years was a school bus driver. For thirty-five years Dick never missed daily weather conditions reporting via phone for the Francestown Weather Observer for NOAA’s National Weather Service. If this were not enough, his biggest accomplishment was making a combined total of 100 years while dedicating 55 years as a member of the Francestown Volunteer Fire Department of which 45 years were as the Forest Fire Warden.

A memorial tribute will be held on Saturday, August 4th, 2018 at 11:00 at the Francestown Volunteer Fire Station with lite refreshments following. All are welcomed to attend.

In lieu of flowers, memorials may be made to the Francestown Volunteer Fire Department.

Everyone that knew him knew his ‘red pickup truck’ and the ‘family dog’ sitting next to him driving around town. We will miss you!