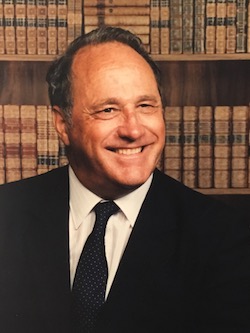 CONCORD, NH:  Alvin “Al” G. Fairfield passed away peacefully at the age of 94 on June 27, 2018 at Havenwood Heights surrounded by his loving family.

Al always had a kind smile and a big bear hug for family and friends.

He was born March 15, 1924 and raised with 13 siblings in Wilton, NH. He married Dolores in 1946 and they raised their family in Manchester, NH, then Al spent his retirement years residing in Concord, NH

He was an Eagle Scout and later served as a Boy Scout leader and camp counselor.  He was a WWII Veteran serving 3 years in the Army Air Corps. He worked as an engineer and retired from AT&T

Alvin was preceded in death by his former wife Dolores and one year ago by his longtime companion Polly Bell.

He is survived by his children, Alvin Fairfield, Jr. of Auburn, CA, Gary Fairfield and wife Irene of Manchester, NH, and Jane (Fairfield) Goodwin and husband Russ of Livermore, CA, three  grandsons, one great-granddaughter and four great-grandsons, all in California.