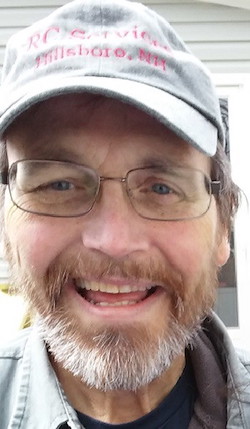 He was born and raised in Philadelphia, PA, and Bellmawr, NJ, where he played football and wrestled.  He also coached youth football.

He worked at both the Philadelphia and Portsmouth Naval Shipyards as an Engineering Technician/Radiographic Film Interpreter where he was known as “Griz,” for 32 years before retiring, and forming his own consulting business, RC Services, Radiography Consulting in 2012. In 2017, Rich transitioned to home renovations, and formed RC Services, Home Renovations and Consulting.

An avid hiker, backpacker, cross-country skier, and kayaker, Rich hiked the Pacific Crest Trail in California, most of the Long Trail in Vermont, much of the Appalachian Trail and all 4000 footers in New Hampshire. Rich touched many people with his kindness and compassion, spreading love and light to all.

A private service will be held at his home.  Many thanks to the hospice team who served him with care and compassion.

In lieu of flowers, donations in his honor may be made to the Concord Regional VNA Hospice Program.