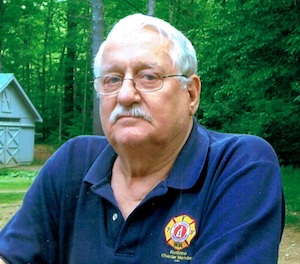 Richard was born January 27, 1937 to the late Richard W. and Pauline (Butman) Cressy.

He graduated from Concord High School in 1955. He served in the Army during the Korean War.

Joe, as he was known, served as a fire fighter with several fire departments. His position was fire fighter and paramedic at the Manor Station in Concord, NH from 1975-1998. He also served as Commander of the American Legion Post # 81 in Contoocook, NH for many years.

His hobbies included owning and flying his own planes, his ham radio, and his Model A Car.

He was survived by his son, Richard Cressy of Contoocook, NH, by his daughter, Deborah Wright of Mesa, AZ, six grandchildren and three great-grandchildren.

A Graveside Service will be held at the VA Cemetery in Boscawen, NH  on September 7, 2018 at 1 pm. A Celebration of Life will follow at the Contoocook American Legion Post 81 in Contoocook, NH.

In lieu of flowers please make contributions to VNA-Hospice or American Legion Post 81 in Contoocook, NH.