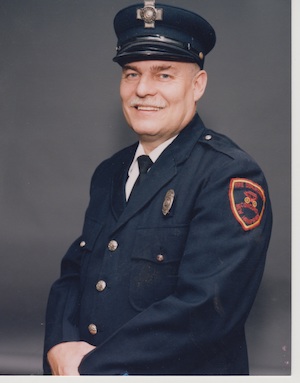 WEARE, NH:  Lawrence (Larry) Albert Damour, Sr., age 70, of Weare, NH passed away on Friday, August 17, 2018 following a lengthy battle with prostate cancer, with his loving family at his side.

“Sarge” as he was affectionately known, was born in Manchester, NH on June 26, 1948 but grew up in Henniker, NH. Larry was born to the late Donat A. and Margueritte (Gagnon) Damour, he was also predeceased by an older brother, Victor Damour, who died before Larry was born.

Following high school, Larry graduated from the Bailey Technical School in St. Louis, MO where he was trained as an auto mechanic. He served in the United States Army between 1968 and 1970 as a motor pool sergeant and was stationed in Korea. During his time in the military, he developed a passion for military vehicles that continued throughout his life.

He was a firefighter and an Emergency Medical Technician with the Concord Fire Department for 25 years and dedicated his life to helping others, even that State Police officer whose vehicle caught on fire after he pulled Larry over.

In addition to humans,  Larry rescued injured animals including birds, ducks, turtles, squirrels, a skunk, and even a pigeon that refused to leave after its rehabilitation. Despite many battles with “Triassic Scunge” and other mystery ailments, Larry was well-known for his sense of humor and penchant for embellishing the truth. He was a prolific orator with the unique ability to carry on a conversation with anyone, whether human or object.

During his life, he enjoyed a variety of hobbies and interests, ranging from amateur (ham) radios to restoring military vehicles and going four-wheeling in the woods. He was a past president and long-time member of the Merrimack Valley Military Vehicle Collectors Club, a family-oriented hobbyists club dedicated to the preservation of military vehicles, and he organized the club’s annual rally in Weare, NH for 30 years.

One of Larry’s proudest, and most often discussed, accomplishments was the house he built in Weare with the assistance of his brother firefighters and other friends. The post-and-beam gambrel house, using materials recycled from an old chicken barn, hardwood flooring from the former Highway Hotel in Concord, and bricks from demolished buildings, was the scene of many family gatherings, holiday parties, joy, and laughter over the years. He chose to spend his final days in the home he built and cherished. Larry’s greatest and most important roles in life though were husband of 43 years to his beloved Dorothy F. (Jewell) Damour; father to Melanie Damour-Horrell of Mandeville, LA; Lawrence A. Damour, Jr., of Henniker, NH; and Timothy A. Damour of Weare, NH; and “Peepah” to Braden J. Horrell and Kellan M. Horrell of Mandeville, LA. He instilled many values in his children such as empathy, compassion, a willingness to help others, and the gift of gab in one of his children. You can guess which one. He never knew a stranger, only people he hadn’t yet told the story of how he built his house. He was a friend to all and would want his friends and loved ones to celebrate his life with laughter rather than sadness.

The family wishes to acknowledge and express our gratitude to Dr. Stephen Lawrence of Family Tree Health Care in Hopkinton, Dr. Frederick Briccetti of NH Oncology- Hematology in Concord, and Dr. Tom Sheldon and Dr. Su Metcalfe of the Payson Center for Cancer Care in Concord, NH for all of their support over the years.

Calling hours will be held at the Holt Woodbury Funeral Home, 19 Hall Ave, Henniker, NH, 03242 on Thursday, August 23, 2018 from 4:00 pm to 7:00 pm. Everyone is encouraged to share their favorite stories about Larry, whether it’s about the times he helped them or their favorite adventures and shenanigans with him.