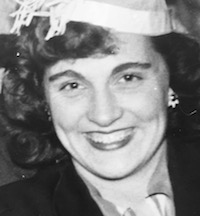 HILLSBORO, NH: Roberta "Chris" McNamara, 89, of Hillsboro, also known as "Bobbie" to friends and family, passed on Wednesday, October 18, 2017 with family by her side.

Born Roberta Jean Christie on June 12, 1928 in Dalton, NH to Robert and Betsey Christie, "Bobbie" as she was known then, graduated from Littleton High School, Class of 1946.

She earned her Bachelors in Education from Plymouth Teachers College and became an elementary school teacher, later teaching Special Education.

Chris lived in the historic Concord End of Hillsboro from 1961 until 2010 when she moved to Portsmouth to be close to her family.

Chris was lovingly cared for by the angels at The Edgewood Center in Portsmouth.

Chris had a compassionate heart for persons with developmental disabilities. The family asks in lieu of flowers, donations be made to Able NH at ablenh.org or 2 1/2 Beacon Street, Concord, NH 03301 to support the important work they do being an independent advocacy voice for our family members, friends and neighbors with developmental disabilities.