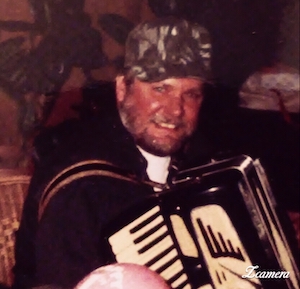 Stanley was born November 3, 1949 in Germany, son of the late Roman Casmire Kazimierczak and Sophie (Dienieko) Kazimierczak. He attended Holyoke Trade School in Holyoke MA and was a 1968 graduate.

Stan was a gifted and highly talented machinist by trade. He could design, and build just about anything that he drafted off a mini blueprint drawing of his making. Many people knew him for his great knowledge in many different subjects. He had a passion for adventure, and a unique sense of humor. He was quick witted, and often the life and energy of any gathering that he attended. At certain occasions and events, Stan would show his pride in his Polish heritage. He would play his accordion to add a distinguished uplift to the event.

Stan made numerous friends in his travels. He was a rugged individual, and nicknamed “King of the River” where he grew up near Holyoke and Chicopee MA. He had many lifelong friends in the Hillsboro, NH area. He often shared humorous stories to enlighten all occasions. If Stan was not working on, or designing and building something, then he was enjoying the great outdoors. He was an avid outdoorsman. He loved to hunt, fish, hike, snowshoe, and ride around on his four-wheeler in the woods. He would often ask questions to friends that were also avid outdoorsmen.

Stan would read books and magazines to enhance his knowledge on whatever subjects were of interest. He highly enjoyed spending time with his close friend, Rick Kirshneur, and numerous others. Stan will be missed by many, and remembered as a true character by all that knew him.

Stan is survived by a daughter, Charlotte Costigan of Pittsfield MA, a son, Stanley F. Kazimierczak, Jr. and his girlfriend, Sarah, of Dalton MA, a son, David S. Kazimierczak and his wife, Felisa, of Adams MA, and three granddaughters Tiffany, Kassandra and Sophia.  Stan was the third of twelve children:  Casmire, Josephine, Henry, Wanda, John, Theodore, Janice and Edward. He was predeceased by two brothers, Richard and Roman, and one sister Mary.

Services and Burial will be held at a later date in Massachusetts.

In lieu of flowers, memorial donations may be made to the local Meals on Wheels, 30 Main St, Hillsboro, NH 03244, located at the South Church.