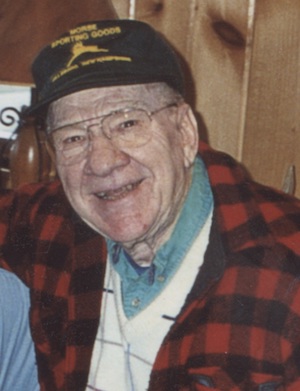 Stuart was born on March 8, 1925 to Carroll and Marion Clark (Prescott), the youngest of five children.

During World War II, he proudly served as a Marine in the South Pacific, as an airplane mechanic. After the war, he returned to Francestown, bought a home, married Priscilla Davis, and took over the management of F. H. Colburn, the town's general store. Later, he went into the insurance business that his father-in-law had started. The family lived in Reading MA during the week, but returned to his beloved hometown every weekend, vacation, and summer. He became an independent insurance agent, with offices in Reading MA and New Boston NH.

The family moved back to Francestown in 1966, and he worked well into his 70's at the New Boston office.

His hobbies were golf, tennis, hunting, and fishing. Stuart played golf into his 90's, and was part of the annual NH Seniors tournament, and the Carlson Cup. He loved tennis, playing doubles with friends in town and during the Labor Day tournament. Deer hunting was an annual event. He was able to hunt in different parts of the United States, and Canada. For many years, he took his family to Moosehead Lake for “ice out” salmon and lake trout fishing, and taught his children to fish, especially for trout. Most of all, he had a great sense of humor, kindness, and smarts. He truly loved people, and was loved in return by family and many friends.

He leaves a sister, Constance Varnum; his children and their spouses, Carol and Roger Carlson, Stuart Clark, Jr., Patricia and Charles Famolare, and Christopher and Jeanne Clark; his grandchildren, Patrick Gibbons, and wife Kelly, Charles Famolare, Jr. and wife Hazel, and Margo Clark.  His great-grandchildren include Tyler and Abby Gibbons.  He leaves many nieces, and nephews and also leaves his loyal dog, Cooper. He was predeceased by his wife Priscilla, and grandson Sean, his brother Roger, and sisters June, and Betty.

There is a Memorial Service scheduled for Saturday, July 15th, at the Old Meeting House from 1 to 2:30 pm, with a reception to follow at Stuart's home, 284 Poor Farm Rd, Francestown.

Burial will be private.

Contributions may be made in his honor to the Francestown Volunteer Fire Department, PO Box 97, Francestown, NH 03043.

The Holt-Woodbury Funeral Home & Cremation Service is assisting the family.  You can express your condolences online by clicking the link below.