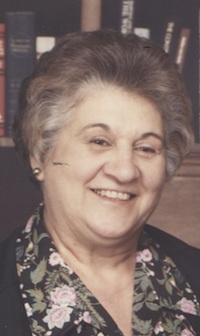 She was born September 11, 1922 to Frank and Rose Eacobacci, the youngest of nine children.

She was raised and educated in Weymouth, MA., and worked as a welder in the Hingham Shipyard during World War II.

Along with her husband, Harold Hunt, Margaret raised her five children in Hingham before becoming a long-time resident of Washington, NH.

Her giving and loving heart was welcoming to all and she made the best tomato gravy on the East Coast.

Margaret is preceded in death by her loving husband, Harold E. Hunt, and her youngest son, Russell Hunt.

She was survived by Joanne and Frank Morse, of Westminster, MA, Charles and Teresa Hunt, of Hillsborough, Rosalie and Harry Abshire, of Pittsburg, PA, and David Hunt, of Windsor, as well as nine grandchildren, seven great-grandchildren and one great-great grandchild.

A graveside service will be held in the spring.