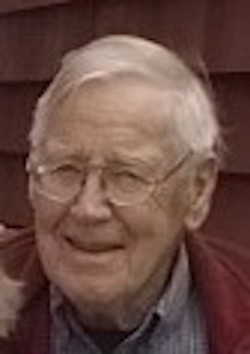 HILLSBORO, NH:  Robert “Bob” Eckberg, 87, of Hillsborough Upper Village died on August 26, 2017. Bob was the only child of Bernard and Ruth Eckberg who immigrated independently from Sweden and met in the Boston area.

Bob was born in Woburn and raised in Winchester, MA.

Bob graduated from the University of Massachusetts and then earned an M.S. in Animal Science from the University of New Hampshire. He married Kathleen White in 1953 and together they raised three children. Bob worked for many years as an animal nutritionist, visiting dairy farmers in upstate New York and New England. Bob and Kathy moved to Hillsboro in 1978 to appreciate an often visited old barn, fields and woods purchased by his parents in 1946.

Bob is survived by his wife of 63 years, Kathleen, daughter, Susan Eckberg Reid and her husband Jonathan of Arundel, ME, son, Stephen and his wife Laura Marron of Contoocook, NH, and son, Peter and his partner Marcia Brier of Miller Place, NY. Bob leaves behind grandchildren, Alexander Reid and Margaret Reid, Lillian Eckberg, and Caroline and Catherine Eckberg.

Since July, Bob had been residing at Hillsboro House due to failing health. The family is grateful for the care Bob received there and for the many friends and neighbors who visited and provided company and support to both Kathy and Bob during that time.

On August 21st, Bob enjoyed a final visit to his cherished Three Wells Farm and had a quiet afternoon with his immediate family enjoying the sunshine and the birds. Bob was a good man with a big heart who enjoyed friendly conversation and sharing stories.

No services are planned. A gathering for family and friends will be scheduled.